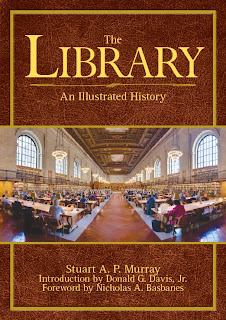 Stuart A.P. Murray's The Library: An Illustrated History (Skyhorse Publishing, 2009) is an extremely broad historical survey of libraries (and certain other aspects of the book world), with pictures. The first several chapters, focusing on the ancient world through the early modern period, are the strongest; after that, particularly in the chapters on American libraries during the colonial period through the twentieth century, Murray's narrative becomes both repetitive and disjointed, lending an air of choppiness to the text that mars the work rather severely.

There are a number of small factual and typographical errors in the text which should have been edited out, and which draw the reader's attention (at least this reader's attention) away from the story. The third librarian of Congress was George Watterston, not Watterson, for example (why this jumped out at me I have no idea).

Murray's book ends with a random survey of some fifty individual libraries and institutions around the world, some of which have already been discussed at length in the text. This section doesn't seem to be governed by any organizational scheme at all, and jumping all over the world for brief snippet profiles may not have been the most effective way to present this information. There is no concluding section to round out the work, which ends abruptly after the institutional profiles.

I should say a word about the images, which are mostly well-chosen (although not always of the highest reproduction quality) and complement the text nicely. There are unfortunately no reference notes, and the "For Further Reading" section is poorly-formatted and surprisingly succinct.

In the introduction, eminent library history scholar Donald G. Davis, Jr. sums up the challenges of a book like this: "The difficult choices to be made in preparation of a short work that reaches for such breadth and scope should not be underestimated. Telling the intriguing story of the production, transmission, preservation, organization, and utilization of cumulated human knowledge - and telling it in a style that appeals to the widest spectrum of readers - is both a challenging and a most worthy task. No one - from library historians and cultural scholars to the general public and young readers - will agree on what should be included in or omitted from the text and illustrations. Least of all will librarians themselves be of one mind - of that we can be sure! But the effort to tell this story, however sketchy and idiosyncratic, is well worth it."

Just so. A flawed book, but a noble attempt nonetheless.
Posted by JBD at 10:18 PM