You may recall some previous posts relating to a little side project I'd been mucking about with, the mapping of book subscription lists (it started with Thomas Prince's Chronological History of New England and then I also mapped the subscribers to Audubon's Birds of America).

This summer in the Rare Book School collections I found another neat subscriber list, this one in the first American edition of Laurence Sterne's works, published at Philadelphia in 1774. This list offered a good opportunity to try out geocommons, which offers some different ways to display map data than Google Maps does. 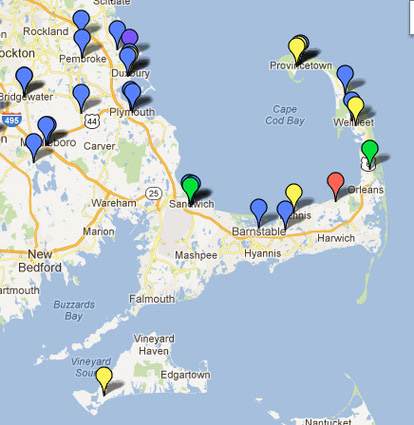 For the Prince map (detailed at left), I plotted each subscriber individually, and keyed the pin color to the number of copies ordered (blue for one, red for two, green for three, yellow for six, &c.). This method worked just fine, although Boston (with 619 of the 1,421 total copies subscribed for) looks very jumbled.

In the Audubon map, since subscribing for just one copy was the norm, I keyed the pin colors instead to the subscriber type: government entities, educational institutions, libraries, learned societies, individuals, and royal families. Again, this worked just fine, and I think both maps make for useful visualizations of the subscription lists.

When I started working through the list of Sterne subscribers, I realized a couple things: first, I didn't want to try and figure out precise locations for each subscriber within cities, as that had proven with Prince and Audubon to consume a bit (hem hem) more time than I wanted to expend. And just plonking a whole bunch of points down in the middle of Philadelphia willy-nilly didn't really appeal to me either. So I decided to work with geocommons and see if I could come up with a more useful visualization method. 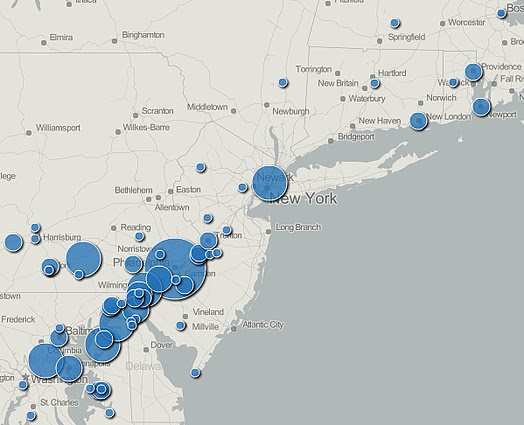 The resulting map is here (with a detail at left). This time, I keyed the pin sizes to the number of subscriptions ordered from each location, and adjusted the size of the marker accordingly. So here, Philadelphia (with 284 copies subscribed for) immediately jumps out as the key location. [NB: That said, because geocommons allows only a limited number of marker-sizes, it's still difficult to get a sense of just how dominant Philadelphia is: the next location, Norfolk, VA, had just 84 copies subscribed for].

The Sterne map is notable for its geographic range, with subscribers from New Brunswick to Grenada (there's a whole other project!).

Having done it once, it was simply a matter of running some numbers to make geocommons-style weighted maps for the Prince and Audubon lists, so I did that too: again with the limited number of marker-sizes the Prince map doesn't quite capture the sheer dominance of Boston (619 copies subscribed for, with the next highest being Charlestown at 69, followed by Harvard College at 34).

The Audubon map works well, though, since there are fewer locations and there's not quite such a single overwhelming one (London with 21, followed by New York at 18, Boston at 16 and Paris at 11).

So, overall, another useful way to visualize these subscription lists and learn a bit more from them.