During the Portland trip this weekend I ran into one of those little books that just grabs ahold of you in the shop and won't let go. I don't know if there's a name for this sort of book - you know the type, the one you know will be yours as soon as you pick it up, even if you can't always explain why ...

This one is Abrégé de l'Histoire Ancienne, en Particulier de l'Histoire Grecque, suivi d'un abrégé de la fable, a l'usage des Elèves de l'Ecole Militaire (A Paris: chez le veuve Nyon, Libraire, rue de Jardinet, An 10, ou MDCCCII [1802]). It's one of a series of small texts produced for the use of the students of the École Militaire in Paris beginning in the 1770s. It's in French. I don't even read French. 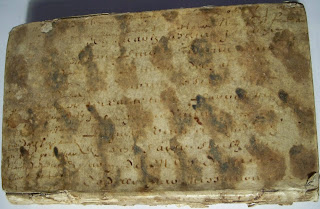 But it's a fascinating book. It's bound in pasteboards covered in what appears to be waste parchment (later stained or painted to produce the colored pattern). The old parchment, however, is almost entirely taken up with manuscript writing - which, from the way it overlaps the edges of the boards, was clearly there prior to the parchment's being attached to the cover boards. I can't make out much of the writing, which appears to be in French (if anybody wants to have a go, let me know and I'll get you some hi-res images), but I like it. 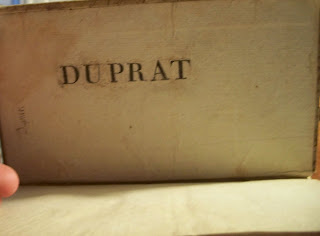 That's interesting in and of itself, and there's still more. Several previous owners have made this book their own. Benjamin Duprat signed his named on the front pastedown, adding the date "14 fevrier 1812." Duprat also signed the rear pastedown, and glued the letters of his last name there, ransom-note style. I still have some tracking down to do on Duprat, but it's possible that he's the same Benjamin Duprat who went on to become a well-known publisher and bookseller in Paris in the mid-19th century. If anyone has any information on that Duprat, I'd be delighted to receive it.

Other owner's marks include an early inked list on the front pastedown of the fourteen rulers of Persia from Cyrus the Great (550-529 BC) to Alexander the Great (330-323 BC), and a later inscription on the recto of the front flyleaf: "Lucy D. Waterman / New York, July 1896."

Sometimes it's not the content that matters. It's the story. And this little book has a great story to tell.
Posted by JBD at 6:31 PM