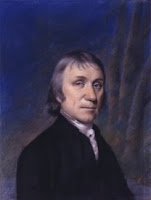 This morning I finished entering the library of Joseph Priestley into LibraryThing. Priestley, who wrote on just about every subject under the sun, had books on a very wide variety of topics (and in a shockingly wide range of languages) as well, so this was another fun collection to work with.

Priestley's library was sold by Philadelphia bookseller Thomas Dobson in 1816 (several years after Priestley's death in 1804), and I worked from Dobson's compilation of the collection, Catalogue of the Library of the late Dr. Joseph Priestley, containing Many scarce and valuable Books (Philadelphia: Thomas Dobson, 1816). Most of the listings were correct and adequate to allow for correct identification of the specific edition in Priestley's library; I have noted the places where this was not possible.

I've located only three volumes from Priestley's library which still exist, all at Harvard. Thomas Jefferson is known to have purchased three, although their identities are not known. Any information on other extant volumes would be much appreciated and I'll be happy to add it to the catalog (and of course, if other books are known, I'd like to know of those as well).

Not surprisingly, Priestley's friends in life (Jefferson, Adams, and Franklin) are his top sharers in books. But modern readers are right up there too, with LT-member meburste (who we know here as the blog-force behind The Little Professor) topping the list (she shares ten more works with Priestley than I do).
Posted by JBD at 9:32 PM