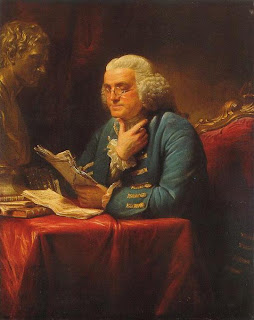 I can't tell you how many times I've questioned my own sanity in the last week, but I am more than a little delighted to report that Benjamin Franklin's library is now entirely entered into LT. All 3,742 titles of it. Some statistics are here, including info on languages (2,583 in English, 906 in French, 207 in Latin, plus some in Italian, German, and a few other tongues), and other interesting bits. As you can see, the last couple months have been busy ones: one other volunteer and I have entered 2,009 of the titles just since 1 January, and ~800 of them in the last ten days (hence the questioning of the sanity).

This project wouldn't have been possible without the hard work and gracious permission of both Kevin Hayes, the American Philosophical Society and the Library Company of Philadelphia, the author and publishers of The Library of Benjamin Franklin (Philadelphia: American Philosophical Society, 2006). Not only have they made the book available via Google Books (here), but they also gave us permission to enter the data from it completely, including the wonderful and incredibly useful annotations.

So, browse about, read Franklin's reviews, and enjoy. Some of the interesting titles/notes:

- The scrubs of Parnassus or, all in the wrong by Whackum Smackum, Esq.

- A book of common prayer stolen from Franklin's church pew. Franklin put an ad in the paper reading in part: "The Person who took it, is desir'd to open it and read the Eighth Commandment, and afterwards return in into the same Pew again; upon which no further Notice will be taken."

- John Whitehurst's An inquiry into the original state and formation of the earth, about which another correspondent wrote to see if BF had received the book: "Mr Whitehurst desired me to ask you if his book was got to your hands he sent it by some Compte or other whose Name I forget."