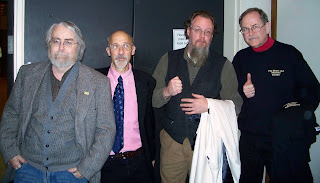 Last night's Boston round of the Great Poe Debate went off wonderfully, before a packed Rabb Lecture Hall at the BPL. I snapped this picture of the combatants before the debate began: from left, moderator Charlie Pierce, Boston's Paul Lewis, Philly's Ed Pettit (pictured below making his dramatic entrance in the now-famous "Philly Poe Robe"), and Baltimore's Jeff Jerome.

The group gave opening statements about the relative importance of their city to Poe, then Charlie had some amusing questions for each of the four, they took some audience questions, and summed up their arguments. A good discussion, very meaty but hilarious at the same time. It was, obviously, quite a Boston-centric crowd, but the discussion about Poe and his legacy transcends location, of course. Boston poet laureate Sam Cornish, called in as celebrity judge, said it would be unfair to award a prize, and gave each debater a stuffed raven. 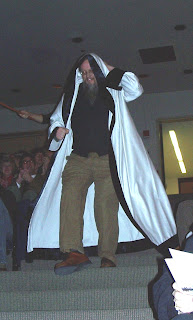 Before the debate, "The Raven in the Frog Pond: Edgar Allan Poe and the City of Boston" exhibit opened in the Cheverus Room on the third floor of the library - that'll be up through the end of March, so do make sure you get up there to see it. It's a well-crafted selection of Poe highlights focusing on his connections with Boston over the course of his life. There's even a Tamerlane, courtesy of Susan Jaffe Tane, a private collector. Don't miss the show!

Many thanks to the BPL folks, Paul Lewis and his team, Ed, Jeff and Charlie for their participation last night.
Posted by JBD at 8:19 AM

Email ThisBlogThis!Share to TwitterShare to FacebookShare to Pinterest
Labels: Poe

I had a great time in Boston and loved the debate! The crowd was much more civilized than the Philadelphia mob.

Even though Paul "won" the debate, home town advantage, I still maintain that after 2009 Boston and Philadelphia will drop Poe like an empty bottle of amontillado!

However, BALTIMORE will continue to celebrate Poe like it has since 1875!

Boston is a charming city and I walked the Freedom Trail!!

Thanks to Paul and Ed and all the people at the Boston Library that hosted the event. A great place with great people!

And thank you Susan Tane!!

Jeff - It was a pleasure to meet you, and thanks for coming up to Boston to talk Poe! I hope you'll come again when it's warmer, and major kudos for walking the Freedom Trail on such a cold week!

I hope to get down to Baltimore sooner or later and see the Poe House!