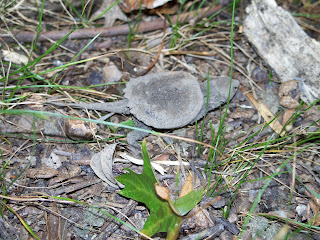 As I walked home from work Friday evening I came upon a small group of people milling around behind the Museum of Fine Arts, looking at something (actually quite a few little somethings) in the grass at the edge of the street. I quickly realized they (the little somethings, not the people) were snapping turtle hatchlings, eleven of them at that point. They had emerged from their nest hole (under some bushes along the edge of the currently-excavated MFA parking lot) and crossed the sidewalk, but still had to negotiate a high curb, then two lanes of traffic, then somehow climb over another six-inch curb and make their way across a busy bike path before getting to the (relative) safety of the Muddy River. That's a pretty tall order when you're an inch and a half long!

One of the people had a box in her car, so she went to get that and the rest of us corralled the hatchlings. No, there wasn't any danger of being bitten: the babies were quite calm and just wanted to be on their way - even in the box, they seemed inexorably pointed toward the water. Once the first bunch were ferried across the street and had trundled into the river we thought we'd better check the sidewalk once more; as we re-crossed the street we could see immediately that we weren't done. Three more hatchlings had emerged and were on the sidewalk. So one other guy (a student at one of the nearby colleges) and I decided we'd settle in for a while and make sure the rest of the turtles made it across the street safely. We sat down and waited, and as the hatchlings continued to emerge (about one every fifteen minutes for a while), we plucked them up before they got too far out into the path of passing pedestrians, bikers, or skateboarders.

By 7:00 (two hours after I'd first stopped), we had released eleven turtles and had nine more in the box ready to go. Many people had stopped to see what was going on. I got a kick out of their reactions: some were delighted and wanted to take pictures, others shrieked and ran off. One guy asked if I had "bought them in Chinatown" (um, yes, I often purchase boxes of baby turtles and sit on the sidewalk with them ...). Somebody called the Boston Herald, and they sent a staff photographer over to make the turtles famous. The product of that is here - the picture is great, although I wish whoever wrote the text would have been a little more careful (obviously trying to help a large adult snapping turtle isn't a particularly smart idea without some preparation, but these little guys weren't going to bite anybody).

After we hadn't seen another new hatchling for about half an hour (and it was getting fairly cold and dark), the two of us still there agreed to call it a night. I didn't think the turtles would move at night (at least I hoped they wouldn't), but I got up early yesterday and went over to check the nest again. Things remained quiet, and when I shined a light down the nest hole I couldn't see anything to indicate there were any more on their way out. I stopped back a few more times over the course of the day on Saturday, just to check, but all seemed well. Hopefully at least some of the new turtles will manage to escape the Muddy River's herons and other predators (including grown-up snapping turtles) and make it through the winter.

The rest of my pictures are here.
Posted by JBD at 9:02 AM