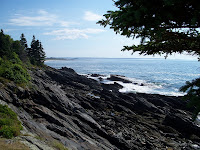 I'm off later today for our annual family vacation in Georgetown, Maine (where I'll be enjoying this view for a week). I'll return next Sunday, 20 July (to a near-overwhelming number of things in my Google Reader, no doubt).

The reading material, finally settled upon yesterday afternoon, will be:

- Joseph Banks, A Life by Patrick O'Brian.
- Tristram Shandy by Laurence Sterne.
- The Fruit Hunters: A Story of Nature, Adventure, Commerce and Obsession by Adam Leith Gollner.
- Clio's Consort: Jeremy Belknap and the Founding of the Massachusetts Historical Society by Louis Leonard Tucker.
- Trying Leviathan: The Nineteenth-Century New York Court Case That Put the Whale on Trial and Challenged the Order of Nature by D. Graham Burnett.
- The Road to Monticello: The Life and Mind of Thomas Jefferson by Kevin Hayes.
- The Astonishing Life of Octavian Nothing, Traitor to the Nation by M.T. Anderson.
- Charlotte's Web by E.B. White (for pre-bedtime reading to the cousins).

I probably won't get through all of them, but last year I came close to running out, and we can't have that. I'm also taking some photocopies of an interesting collection of Revolutionary War letters with me to transcribe, and will be working on a couple other little projects as well.
Posted by JBD at 11:05 AM